To celebrate the long-awaited arrival of Gambit, the dev team is dealing out a new limited-time Raid themed around the Ragin’ Cajun. The new Gambit Raid will follow many of the rules of traditional Raid content with some new twists that will flex your theorycrafting muscles.

Please note that testing for the feature is on-going and thus the details are subject to change prior to release.

Beginning on June 15th @5:00PM PDT, the Gambit Raid will run a total of 14 days, which is replacing the slot that a Greek Raid would run (will return after the Gambit Raid). Alliances can start a new version of the Raid every 24 hours using unique raid keys for this event for a total of 14 runs.

Similar to other Raids, each node will have specific trait requirements. For this raid, certain characters will have temporary traits of Diamonds, Clubs, Hearts and Spades. Here are the characters available for each of these traits.

This Raid will have its own dedicated resources for Energy Refills and Heals/Revives, so you don’t need to stockpile resources from other Raids to prioritize them for this one.

Below you can see diagrams of the nodes, the trait requirements for each, and the lanes you’ll likely want to assign your Alliance members. 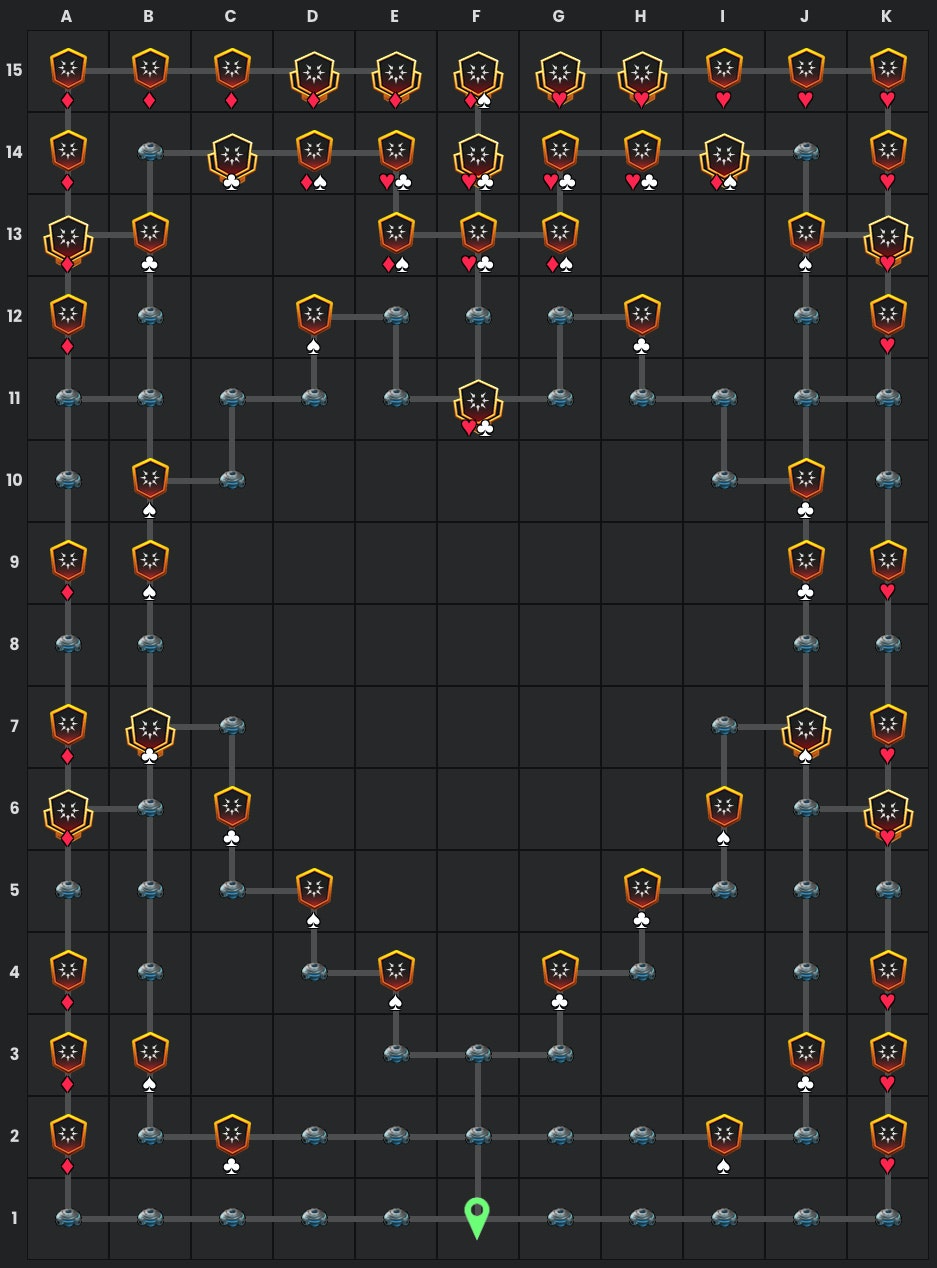 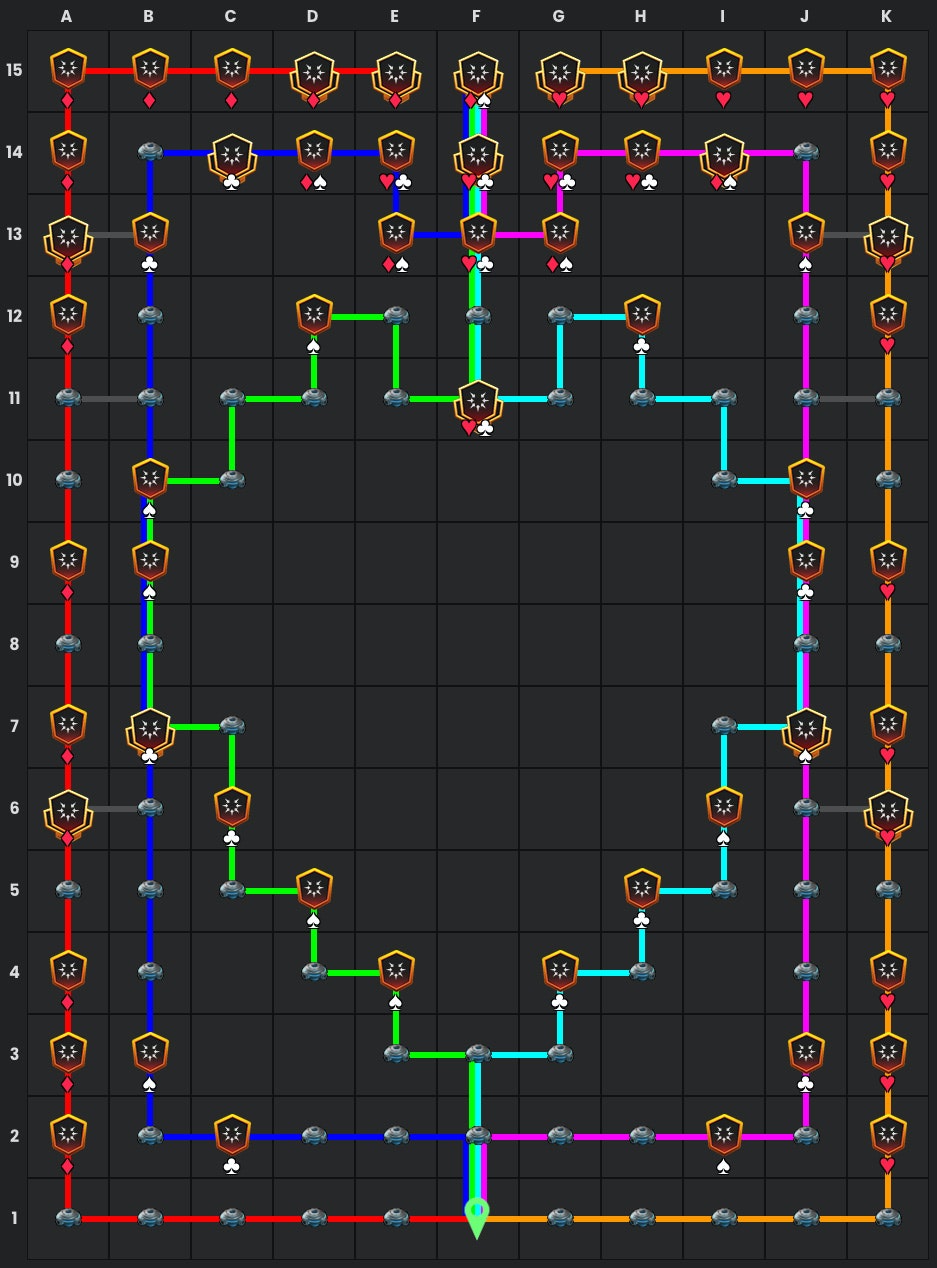 Please note that the team compositions listed below may include additional characters that are not of the listed trait. Also, the compositions may change between the different nodes. For example, the Brotherhood-themed composition in M1 might be different in M2 and M3. There will be a total of 10 difficulties available (Normal + 9 additional), all of which will be unlocked at the start of the event. Completing the higher difficulties will grant all the first-time rewards of the difficulties below it. This is intended to be a significant challenge and will put the full might of your teams to the test, but the higher the difficulty you can complete, the better the prizes!

Go all in on this challenging event to cash out with some highly valuable prizes. Individual Node rewards will give out Raid Credits, Gold, points for the associated Ace of Raids Milestone, and points for the Raid Season Milestone. Rank Rewards will include Gold, fragments of a special Orb that drops Gambit shards, and points for Ace of Raids. First-time completion rewards available include T2 L1 Ions in some difficulties and the coveted T2 L4 Ions for the higher difficulties.

In tandem, there will be a 7-day milestone that will repeat once (14 days total) that will grant tons of rewards including the opportunity to rack up more character shards for Gambit, Disco Balls (for the Rollin’ Rebel Milestone), T4 Ability Materials, and more!  The second run of the Milestone will include the coveted Glimmer Bracelet, giving you a big boost to your progress in Rollin’ Rebel.

Look forward to seeing more details regarding the rewards as we get closer to the Gambit Raid release date.

We are hard at work updating the Maps page of MSF.gg to include info of the Gambit Raid, which should be ready to view by the time that the event begins.

We are incredibly excited to get this new Raid feature in players' hands and hearing your feedback to make future iterations even better. Don’t put it off—now is the time to collaborate with your Alliance to prepare for this explosive new Raid!