Swinging in from the Spider-Verse are three new spider people that make up S.T.R.I.K.E. 's newest team, Tangled Web. Our most recent blog post revealed the backstory of our third original character, Spider-Weaver, and if you haven't checked it out already, head on over to dive into her lore. Fighting alongside Spider-Weaver will be fan favorites Spider-Man (2099) and Spider-Man (Noir) to form the three-member team. Tangled Web are Cosmic Crucible specialists, similar to the likes of the Unlimited X-Men and Wakandans. Let's pull back the web on the Tangled Web team…

Spider-Weaver is a Protector for Tangled Web with high Health stats to help her sustainability, and surprisingly high Damage stats. Spider-Weaver is a unique Protector with a Charged mechanic that mitigates damage aimed at her team by way of her Passive Ability, "Weaver of Destiny." When Charged, she reduces all enemy Accuracy by 100% and will lose Charged each time an enemy misses. When she encounters an enemy with a "can't miss" ability, Spider-Weaver will keep the Charged and apply the accuracy reduction towards the next attack. Her Ultimate Ability, "Threads of Fate," supplies her with Charged and she gains more Charged in Cosmic Crucible. So if you keep Spider-Weaver supplied with Ability Energy, Crucible enemies will be destined to fall before the Living Tribunal.

It’s been previously mentioned that the fifth/final Apocalypse Saga will have some additional requirements. Spider-Weaver will play a key role in unlocking Apocalypse as we can officially announce that she is the first required character (more to be announced later) to complete the final Saga. More details will be revealed in the coming months, but we recommend powering up Spider-Weaver to be ready for the final confrontation.

Miguel O'Hara was born in the alternate future timeline of 2099 where he worked for the mega corporation Alchemex as the head of the genetics department. Inspired by surviving records of the hero Spider-Man, Miguel tried to create similarly powered humans for Alchemex by imprinting a spider's genetic code into human physiology. But after being poisoned in an attack, Miguel conducted the procedure on himself in an attempt to cure himself. The procedure went awry, resulting in the splicing of Miguel's DNA with the genes of a spider. The accident gave Miguel superhuman strength, agility, and healing factor, along with the physical changes of spinnerets that produce spider silk, fangs that secrete a paralyzing venom, and talons capable of digging into materials as durable as cinder blocks. With his newfound powers, Miguel took up the mantle of Spider-Man, protecting his city from the evils within.

Spider-Man (2099) is a Controller with high Focus, which he uses to make negative effects stick to enemies. In Crucible, he loves to Crit and when he does, he prolongs his negative effects. He also grants extra Drain, Focus, and Resistance to Tangled Web allies in Crucible, so you'd be wise to send this spider in front of the Living Tribunal with his Tangled Web friends.

Passive - Spider from the Future

In a parallel universe, during the Great Depression of 1932, Peter Parker lived in The Big Apple plagued by criminal gangs. After his Uncle Ben was bumped off by hoods working for a crime lord called "Goblin," Peter set off in search of justice. He followed a lead to a warehouse where Goblin's goons were picking up a shipment of antiques. One of the containers broke, spilling a cluster of spiders, and one of those spiders bit Peter. The bite caused him to pass out and in a dream a Spider God told him its bite will bestow the curse of power to him. Peter awoke in a black cocoon and when he freed himself, he discovered that he had arachnid-like abilities! He possessed superhuman strength, could shoot webbing from his wrists, had a spider-sense for danger, and could stick to walls. He created a costume using his uncle's World War I-era airman uniform and after finally stopping Goblin and his men, became the vigilante Spider-Man.

This hard-boiled Blaster, who is keen on feeding foes a lead salad, brings the Damage to battle, both for himself and his Tangled Web allies. If Spider-Man (Noir) gets himself into a sticky situation in battle, he can mitigate his damage taken by activating Stealth via his Basic Ability, "Put 'Em Up." And as a nod to his lore and era, Spider-Man (Noir) slugs Hydra and Swarm enemies extra hard.

Season 1 of Cosmic Crucible is expected to start on September 15th and the first trial will begin on September 19th at 2:00PM (PDT). Here are the details:

Season 1 will increase in the number of Leagues from 6 to 19, by creating subdivisions. Bronze through Masters Divisions will gain three subdivisions each and a new league called "Grandmasters" has been added to the top of the League system. No player will begin in the Grandmasters League but rather the limited placement in this elite status must be earned.

Leagues will also now be defined based on a set amount of Tribunal Rating. Additionally, a Demotion Rating will be implemented to give a bit of leeway after ranking up to a new League. For example, a player will need to earn 1,725 points to achieve the rank of Diamond II. However, Diamond II has a Demotion Ranking of 1,700, so a player would need to lose 25 points before being demoted to Diamond I.

Please note that because of the new relationship between Leagues and Tribunal Rating, a player might not start Season 1 in the same League that they were in during the Pre-Season. But don't worry, the vast majority of players will still be earning comparable rewards, if not better than before.

Because of the new subdivisions, there will also be a small Tribunal Rating deflation that will occur at the start of Season 1, meaning that most players will see their overall point total moderately decrease. This doesn’t mean you are getting less rewards and should not significantly impact matchmaking.

Crucible Credits rewards have been expanded to the new Leagues, along with the addition of more T2 L4 Ions. Your rewards will also increase more regularly than during the Pre-Season, so rack up wins to earn more rewards.

As mentioned, the Tangled Web team joins the Unlimited X-Men and Wakandans as the Cosmic Crucible specialists. Power up these teams to thrive in Season 1.

We also have some quality of life improvements arriving with Season 1. First up, high-rated Cosmic Crucible players will be matched against different players on a more regular basis.

Second is a commonly-requested improvement based on player feedback. On the Squad Select Screen, your top-powered characters will no longer autofill, saving you the time of having to clear the slots first.

Third, the Main Menu Cosmic Crucible Button will give you updates on when Trials are occurring.

Put your entire roster on high alert because there are new rules for Stages 3 through 6 and new Global Stage Rules in effect. Here are the Season 1 Rules:

Remember to link your game to your Scopely Account in the “Options” menu to access the daily Hulk Hunter Gamma Booster Web Milestone for progress. Collect your Mutated Cells by visiting the “Milestones” page on the web to help complete the Hulk Hunter Event .

Band together with your Alliance in the name of Iso-8 resources on September 4th at 2:00PM (PDT) with the second run of Coordinated Assault. Spend Iso-8 Campaign Energy to earn points (1 Energy = 1 point) toward a 7-day Alliance Milestone that rewards T2 Level 4 Ions, T2 Level 1 Ions, T1 Ions, and Mutated Cells for progress in Hulk Hunter. Dress for success on September 7th at 2:00PM (PDT) with the upcoming Power of Attorney event, where you can get your green hands on She-Hulk's "Attorney at Law" Costume, along with Hulk Hunter progress and more.

Rack up points toward this 6-day milestone by earning Briefcases from the Public Defender and Fighting Force Milestones (1 Briefcase = 1 pt). Rewards include:

Use your Flash Bits to purchase your choice of costume(s) from the Costume Store, including She-Hulk's new "Attorney at Law" costume, Ms. Marvel’s "No Normal," and Misty Knight's "Private Eye." Blitz your way to points toward a milestone that rewards Briefcases and fragments for the Orange Elite Orb, Purple Bio Gear Orb, and Gold Orb. Earn more points by using Gamma and/or Defender characters, and even more points if they're equipped with GT 13+. The next Quick Rumble lands on September 9th at 2:00PM (PDT) with the featured trait of Weapon X. Score wins through either Blitz or Blitz Sim (40pts) to earn points toward the X-Termination Milestone, which rewards Mutated Cells, Blitz Credits, and Ability Materials. Accelerate your progress through the milestones by winning with characters who possess both the Cosmic and Mutant traits at 5 Stars (1,300pts) or go even faster with those characters at 7 Stars (2,950pts). 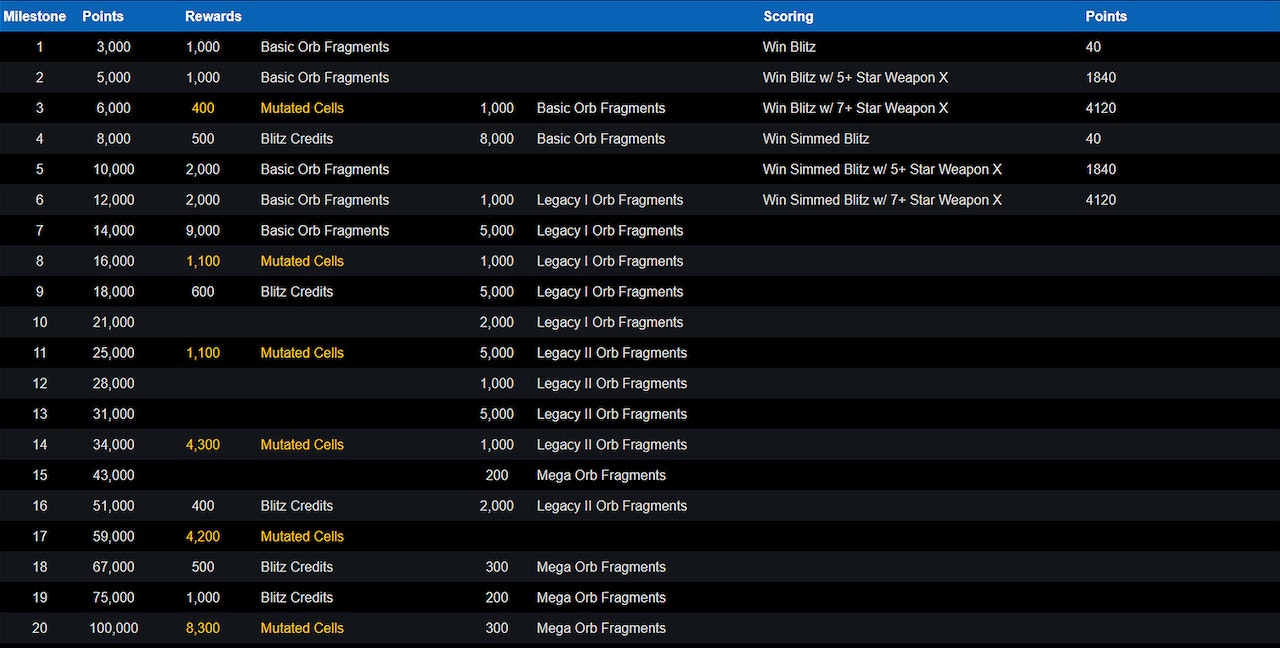