Feast on the defeat of your enemies and reap the reward of a powerful new ally during the upcoming Famine Scourge Event! Your first chance to recruit Rogue, Apocalypse’s second Horseman, starts on July 6th at 5:00PM (PDT) for Commanders Level 50 and above.

The Famine Scourge Event will see an improved Leaderboard experience from the Pestilence run. We’ll be assertively checking the leaderboard results during the entirety of the event – both through automation and manual review.

Nodes 5 and 10 for Difficulty 5+ will require A-Force, Young Avengers, and/or Inhuman characters, so make sure you power up these teams to earn the highest score possible.

There will be bonus rewards only for this first run of the Famine Scourge Event, so put your best efforts forward in the inaugural edition. During a limited-time Scourge Event, clear up to 10 nodes in a Difficulty and earn the most points possible towards your Run Score. You'll have unlimited Run Score attempts and a Run can be canceled and restarted at any time with no penalty, so go for the highest score possible by attempting multiple runs.

Customize your runs by selecting a difficulty from 1-10. Higher Run Difficulties will narrow the character traits you can use, but they'll reward more points. You can also earn additional points by activating Scourges, which either bolster enemy teams or hinder your own. Keep in mind that nodes 5 and 10 for Difficulties 5 and above will require specific characters to fully complete them. Also note that the highest difficulties are not necessarily intended to be fully completed yet, so don’t worry too much if you can’t get to or complete Difficulty 8+ in the first run.

The Famine Scourge Event will see an update as 10 Scourges (some previously marked as Free) have been removed and 7 new ones are added. The removed Scourges are Back in the Fight, Dark Resolve II, Experimental Serum III, Fool Me Twice, I See You, No Help Coming, Poisoned Energy I, Quality Minions, Vile Rally, and Whole Latte Power.

The Scourges new to the Famine Event are:

Each Scourge Event will require a minimum point total in order to unlock the Horseman (see the points for Rogue above). You'll earn Horsemean shards from Milestones and Rank Rewards. These rewards can be earned again in subsequent runs of the same Scourge Event, so you’ll have more opportunities in the future to get Rogue all the way up to 7 Yellow Stars.

Red Star Promotions for Rogue and the other Horsemen will not be available via the Red Star Orb or the Elite Orbs.

This red star featuring starting July 6th @ 5:00PM (PDT) will be a beast, with a 25% chance (equal chance per character) to get one of the following fifteen characters: The next Quick Rumble storms your way on July 7th at 5:00PM (PDT) and features A.I.M., your favorite lab rats. Score wins through either Blitz or Blitz Sim (40pts) to earn points toward the Sunburned Scientists Milestone, which rewards Mjolnir Fragments, Blitz Credits, and Ability Materials. Speed up progress through the milestones by winning with characters who possess the A.I.M. trait at 5 Stars (1,300pts), and go even faster with those characters at 7 Stars (2,950pts). 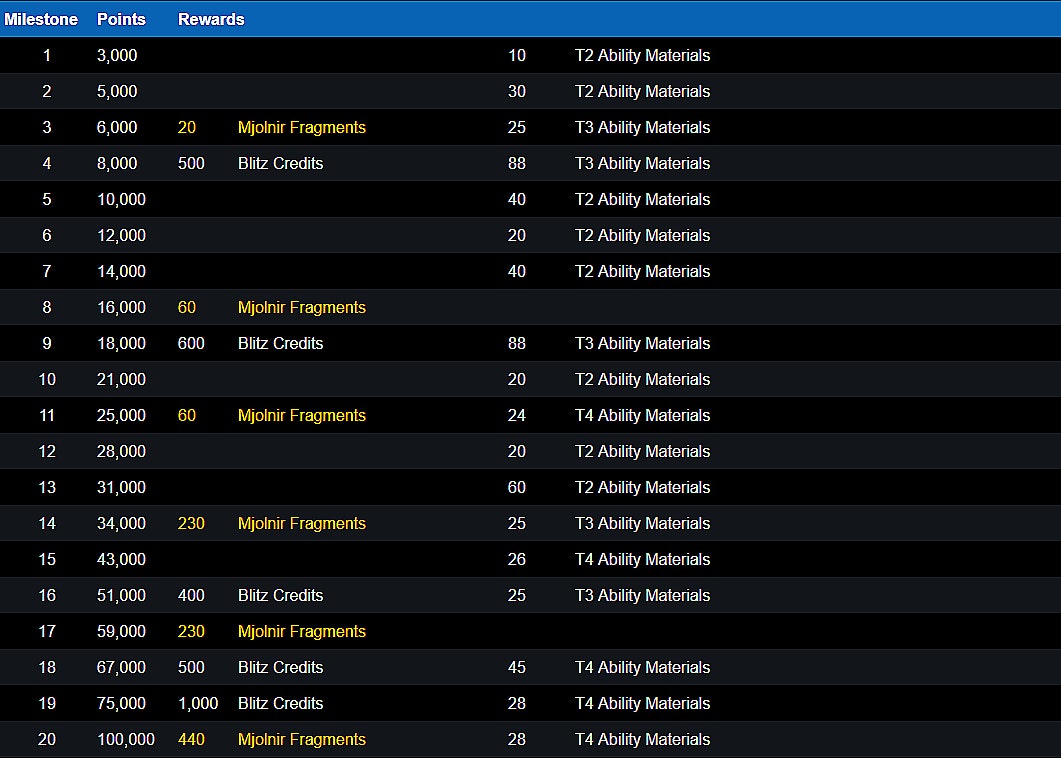 One of the only times you’re encouraged to feel blue, unless you are Beast, is with the Victory Blueprint that returns on July 8th at 5:00PM (PDT) with T2 Level 4 Ions, in addition to Summer of Thunder progress. Your daily intake of Training Modules has been given a bump to help you train characters to the newly added Level 90. These updates happened on all Campaign nodes that reward Orange gear or better:

This is upgraded from the previous values of (per 10 energy spent):

Bolster your roster with shards for characters who are shuffling locations on July 6th at 5:00PM (PDT). Over in the Arena Store, Dagger will have added availability for 975 Arena Credits, Colleen Wing’s cost will be reduced to 500 Arena Credits, and Spider-Punk is swinging exclusively into the Arena Orb.

And speaking of Orbs, on July 4th at 5:00PM (PDT), Agatha Harkness will be moving into the Basic, Ultimus, Mega, and Premium Orbs, in addition to Gold Supplies.