Go on a mission with your Alliance in the name of Iso-8 resources on December 10th at 1:00PM (PST) with the first run of Coordinated Assault. Spend Iso-8 Campaign Energy to earn points (1 Energy = 1 point) toward a 7-day Alliance Milestone that rewards T2 Level 1 Ions, T1 Ions, and Snowballs for progress in Festival of Frost. Prepare for the cold embrace of the Death Scourge Event on December 13th at 1:00PM (PST) with the Herald of Death Event. Earn valuable character shards and Festival of Frost progress with Snowballs during this limited-time event:

Earn Deathbringer Orbs from select Campaign nodes and the Technical Tactics Web Milestone, and then open them to earn character shards for Wakandans, Bionic Avengers, Mutants, and Minions.

Score points toward this 7-day milestone by battling in Alliance War and by earning Deathbringer Orbs to earn: Raid to rack up points for this daily milestone and then head to our website to claim your rewards: Deathbringer Orb Fragments and more!

Rage with machines on December 16th at 1:00PM (PST) with Cold Metal, the next Quick Rumble. The featured trait will be Bionic Avengers and along with Quick Rumble rewards, Cold Metal will reward Snowballs, Purple Gear Credits, Orange and Teal Raid Orb Fragments, and Armory 15 and 16 Orb Fragments. Accelerate your progress through the milestones by winning with characters who possess the Bionic Avenger trait at 3 Stars, 5 Stars, or go even faster with those characters at 7 Stars. 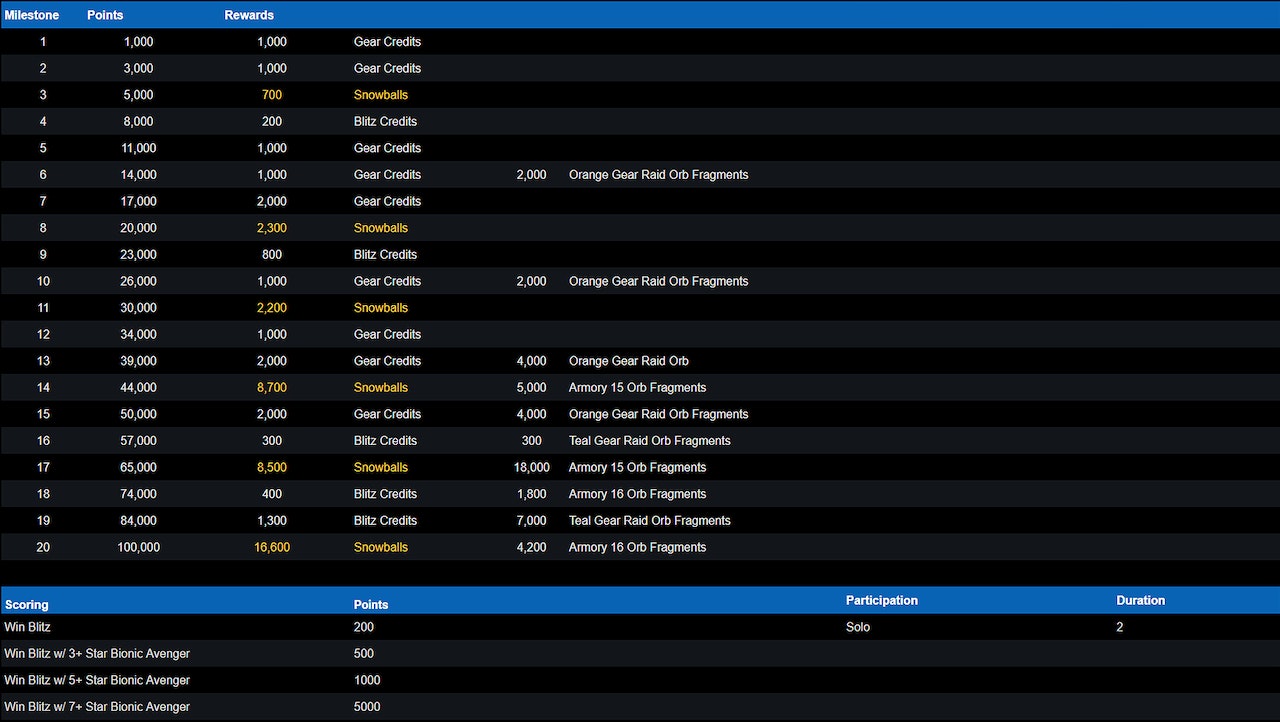 A deadly serious opportunity is knocking at the door in the form of the Death Scourge Event! Your first chance to recruit Archangel, Apocalypse's fourth Horseman, lands on December 16th at 1:00PM (PST) for Commanders Level 50 and above.

You can unlock a 3-Yellow Star Archangel during the event through the milestone rewards with a Run Score of 500k points. If you fall short of that mark, you can still unlock Archangel with a Run Score of 425k points and by earning additional character shards through the Rank Rewards, which are delivered at the conclusion of the event. These rewards can be earned again in subsequent runs of the same Scourge Event, so you’ll have more opportunities in the future to get Archangel all the way up to 7 Yellow Stars.

Nodes 5 and 10 for Difficulty 5+ will require Wakandans and/or Bionic Avengers, so make sure these teams are powered up to prepare for the challenge.

This first run of the Death Scourge Event will feature bonus rewards, so bring your A-game to this first run to maximize your return.

During this limited-time Scourge Event, clear up to 10 nodes in a Difficulty and earn the most points possible toward your Run Score. You'll have unlimited Run Score attempts and a Run can be canceled and restarted at any time with no penalty, so attempt multiple runs to get the highest score possible.

Customize your runs by selecting a Difficulty from 1-10. Higher Run Difficulties will narrow the character traits you can use, but they'll reward more points. You can also earn additional points by activating Scourges, which either bolster enemy teams, hinder your own, or both. Keep in mind that nodes 5 and 10 for Difficulties 5 and above will require specific characters to fully complete them. Also note that the highest difficulties are not necessarily intended to be fully completed yet, so don’t worry too much if you can’t get to or complete Difficulty 8+ in the first run of the event.

For a rundown of all of the Scourges and their point values for this Scourge Event, be sure to check out our recent blog.

Red Star Promotions for Archangel and other Horsemen will not be available via Red Star Orbs or the Elite Orbs.

Gear up and get ready to recruit Archangel!

Calling all Heroes: new Campaign missions are heading your way on December 13th at 1:00PM (PST) with the arrival of Heroes Assemble Hard Difficulty Chapters 3 and 4. Don't miss out on big rewards, including Teal Gear and character shards for Spider-Woman, Shang-Chi, Spider-Punk, Phyla-Vell, and Anti-Venom.

Get your paws on Black Panther (1MM) character shards starting on December 14th at 4:00PM (PST) when he heads into the Basic Orb, Ultimus Orb, Mega Orb, Premium Orb, and Supplies Store. To make way for this update, Moon Dragon will be removed from the Mega Orb.

Don't miss the upcoming Free Claim Friday where you'll be able to grab 5x Nemesis Shards and 16,500 Snowballs to earn progress in the Festival of Frost event.

While this Free Claim will only be available for 24 hours (ending December 10th at 1:00PM PST), keep an eye out for more Free Claims every day on the web!