They say it takes over 10,000 hours of practice to master a skill. Today, we're meeting three individuals who, along with their teammates, have mastered the art of being a big bad. Laughing maniacally and preparing for a reign of terror are the Masters of Evil. This team will consist of the Dark Dimension terror Ultron and newcomers Titania, Absorbing Man, Moonstone, and Kang the Conqueror. They'll be putting aside their world domination aspirations in favor of dominating Cosmic Crucible.

The Masters of Evil will also be a required trait for a future Legendary character event, so be on the lookout for more information on this in the future.

Titania will be dropping into battle soon, so today, we'll be covering the other three Masters of Evil.

Carl Creel was a violent boxer turned criminal when he landed in jail after being convicted of assault. While serving his prison sentence, Creel was selected by Loki, the Asgardian God of Mischief, as his unwitting pawn in a plot against Thor. Loki secretly spiked Creel's drinking water with a potion composed of rare Asgardian herbs. This elixir gave Creel the power to absorb and duplicate the physical properties of anything he touched or touched him, including mystical properties of objects and the superpowers of beings. Under the name of "Absorbing Man" and using his newfound powers, Creel escaped from prison but lost to Thor in battle. Afterward, Creel was recruited to join the Masters of Evil, where he met Titania, whom he eventually married. He's clashed time and again with Thor, the Incredible Hulk, the Avengers, and Spider-Man.

Absorbing Man is a Protector for Masters of Evil, and he's fortified with high Armor and Resistance stats. His M.O. is absorbing enemy attacks and clearing status effects. He gains Taunt on spawn in all game modes, making him a powerful asset for any team, and bolsters himself by copying and clearing a positive effect from his attacker. Absorbing Man also helps his partner in crime, Titania, when they're allies by granting her Counter in Cosmic Crucible.

Ultimate - Diamond in the Rough

>On CRUCIBLE OFFENSE, apply 4 Counter to a random Titania ally.

Nathaniel Richards was born in the 40th Century of an alternate timeline where Earth never entered the Dark Ages. Gifted with a genius intellect, Nathaniel studied robotics and cross-dimensional recordings from Earth-616 (mainstream Earth) before discovering time travel technology that had been left behind by his dimension-hopping ancestor. Bored with the peace of his planet, Kang used his ancestor's records and technology to become an overlord of the time-space continuum. Armed with his century's technology that gave him the equivalent of superhuman abilities, he took on the name of Kang the Conqueror and set out to tame time and space. Kang's frequent time-traveling created countless versions of himself, some of whom became heroes and attempted to eliminate the original Kang. This powerful villain has squared off against the Fantastic Four, Avengers, and even Doctor Doom while attempting to rule over Earth-616.

Kang the Conqueror is a Blaster and on top of big Damage to aid his attacks, he has great Speed stats. He bends time to his will by manipulating the Speed Bar of both his allies and enemies, including an "On Spawn, Speed Up for 2 turns to himself and Masters of Evil allies." Kang also takes chance out of the equation by allowing his Masters of Evil allies to reach 100% Crit Chance. And while he's powerful in Cosmic Crucible, in general, Kang the Conqueror is especially potent on Offense.

>Apply Slow for 2 turns to primary and adjacent targets.

>Apply +2 Offense Up to self and all MASTERS OF EVIL allies.

>Reduce Speed Bar by 10% for all enemies.

>Apply +2 Speed Up to self and all MASTERS OF EVIL allies.

>This attack is Unavoidable and cannot be blocked.

>Attack all enemies for 30% Piercing. This attack ignores Defense Up.

>In CRUCIBLE, clear Speed Up on all enemies.

Gain +20% Crit Chance for self and all MASTERS OF EVIL allies.

In Crucible, gain +20% Crit Chance and +10% Crit Damage for self or any MASTERS OF EVIL ally with Offense Up.

>On Spawn, apply Speed Up for 2 turns to self and all MASTERS OF EVIL allies.

>When any enemy gains Speed Up, fill Speed Bar for this character by 10%.

>Gain an additional +20% Crit Chance for self and all MASTERS OF EVIL allies.

>Gain an additional +10% Crit Damage for self and all MASTERS OF EVIL allies.

Karla Sofen was a renowned psychiatrist who took pleasure in manipulating her patients into paranoia, rather than helping them. She used her master hypnosis abilities to force the body of Lloyd Bloch – the villain known as Moonstone – to reject the stone that gave him his power. Once in possession of the moonstone, Karla's body absorbed it, making her the new Moonstone and granting her spectacular abilities, including flight, super strength, speed, intangibility, and photon blasts. As Moonstone, she joined the Masters of Evil and fought against Captain Marvel and the Avengers. And although Moonstone has fought on the side of heroes on occasion, she returns to her villainous ways when the ends suit her.

Moonstone is a Controller and her powerful kit is bolstered with high Focus and Speed stats. This master manipulator has two abilities that Stun enemies, applies Trauma in Cosmic Crucible, and her Ultimate ability, "Phasing Punishment," lowers enemy Speed Bar. Moonstone also gives her Masters of Evil allies a boost in Cosmic Crucible in the form of additional Focus.

>Apply Stun to the primary target.

>Reduce Speed Bar for primary and adjacent targets by 20%.

>On OFFENSE, MASTERS OF EVIL allies gain an additional +100% Focus.

Bond with monster rewards on January 25th at 1:00PM (PST) with the upcoming Symbiote Sabotage Event. Get your tendrils on Agent Venom character shards, Super Patriot progress, and other resources to inject into your roster with this limited-time event. You can earn up to 180 Agent Venom character shards during Symbiote Sabotage, so don't miss a day and maximize this Rebirth Blaster's firepower.

Lock and load points toward this 7-day milestone by battling in Alliance War, spending Power Cores, and from limited-time Symbiote Sample currency. Symbiote Samples can be collected from the Sym-Soldier Web Milestone rewards and from Free Daily Web Claims that'll appear on our website throughout the event. Rewards up for grabs include: Earn Blitz Credits to hit milestones that reward prizes that can be claimed on our website: Symbiote Samples, T3 and T4 Ability Materials, and Blue, Purple, Orange, and Teal Gear Orb Fragments. Flex your X-Gene on January 27th at 1:00PM (PST) with X-plosive Offense, the next Quick Rumble. The featured trait will be Unlimited X-Men and along with Quick Rumble rewards, X-plosive Offense will reward Justice Medals, Blitz Credits, Basic Orbs, Legacy I Orbs, Legacy II Orbs, and Mega Orb Fragments. Speed up your progress through the milestones by winning with characters who possess the featured trait at 3 Stars and 5 Stars, or go even faster with those characters at 7 Stars. Whet your appetite for Rogue character shards on January 23rd at 1:00PM (PST) with the return of the Famine Scourge Event. Don't miss this chance to recruit or add another star to this Famine Horseman. And it's not too late to prepare! Power up your A-Force, Young Avengers, and/or Inhumans in order to tackle Nodes 5 and 10 on Difficulty 5+. Players who already have 810 Rogue character shards will be moved to the separate Champion’s Bracket where there will be separate Milestone Rewards that don't include Rogue shards.

Harness the luck and good fortune of the new year on January 26th at 1:00PM (PST) with the upcoming Lunar Festival Event. Enchant your roster with costumes, character shards, Red Stars, and more: 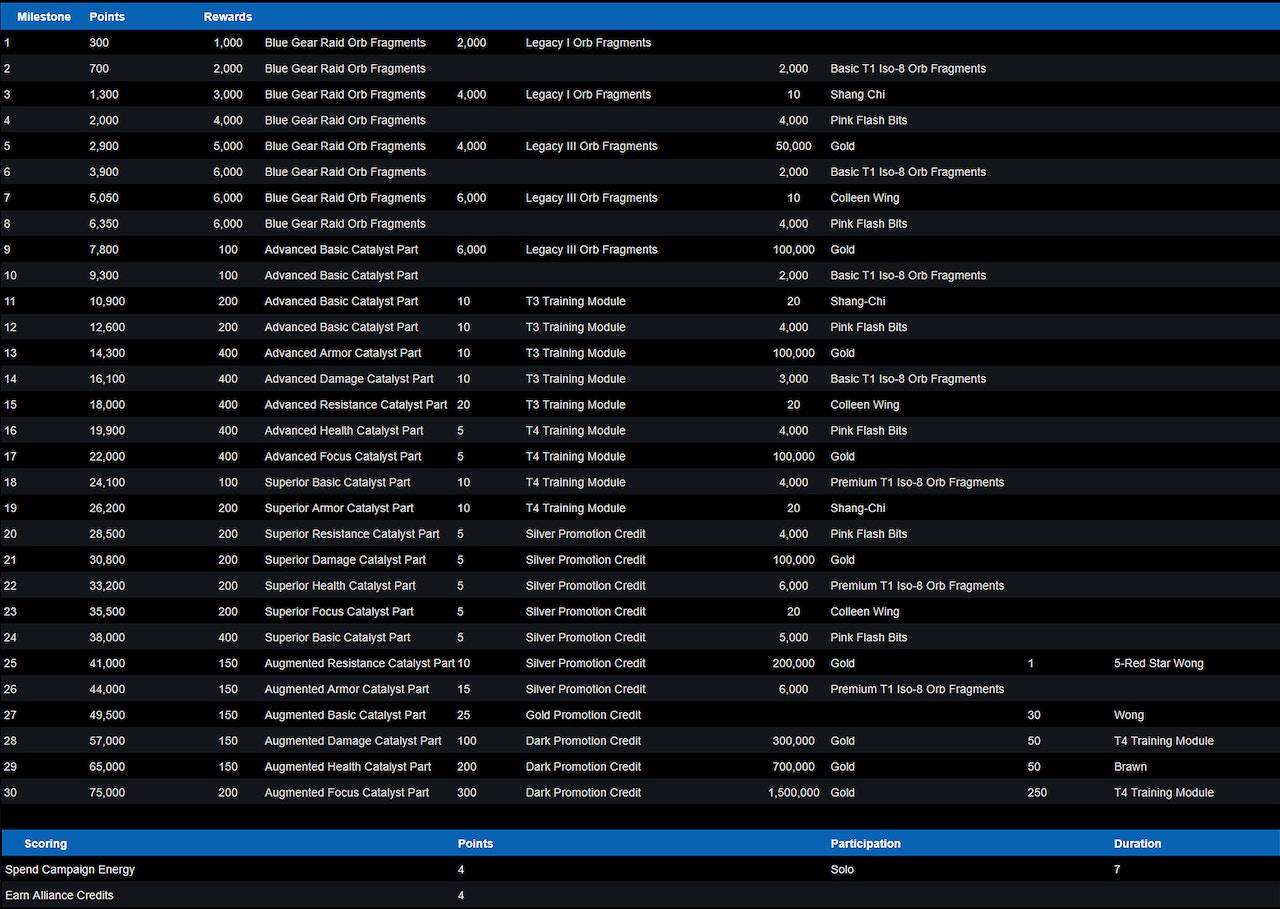 Rack up as many points as possible to climb the ranks of this Leaderboard that rewards T2 Level 5 Ions.

It's lights, camera, action for the next season of Mojo's Mayhem on January 27th at 1:00PM (PST). Season 28 will be two weeks long, but just like the Holiday Pass, the Ratings have been adjusted to allow you to earn the same rewards during this shorter time period. The featured character shards for Season 28 will be Nakia character shards, so don't miss out on rumbling in Real-Time Arena in exchange for this War Dog spy's shards and other big rewards.

Infiltrate the web store to grab 250,000 Woman Out of Time Milestone Points and power up your roster with rewards from this limited-time event. The Free Claim also includes 7,500 Justice Medals that'll earn you progress in the Super Patriot Event.

This Free Claim will only be available for 24 hours (ending January 21st at 1:00PM PST), so don't miss out and be on the lookout for more Free Claims every day on the web!

Notification: Chromebooks Will No Longer Be Supported

Starting with the upcoming version 6.7 Release, which is set for the beginning of February 2023, you'll no longer be able to play MARVEL Strike Force on Chromebook devices. Please ensure you have a supported device on which to play MARVEL Strike Force to avoid interruption to your gameplay. You can find the minimum device requirements on our support page: https://scopely.helpshift.com/hc/en/46-marvel-strike-force/faq/5855-what-kind-of-device-do-i-need-to-play-on-ios-or-android/